Play The Bridge For The Fish! 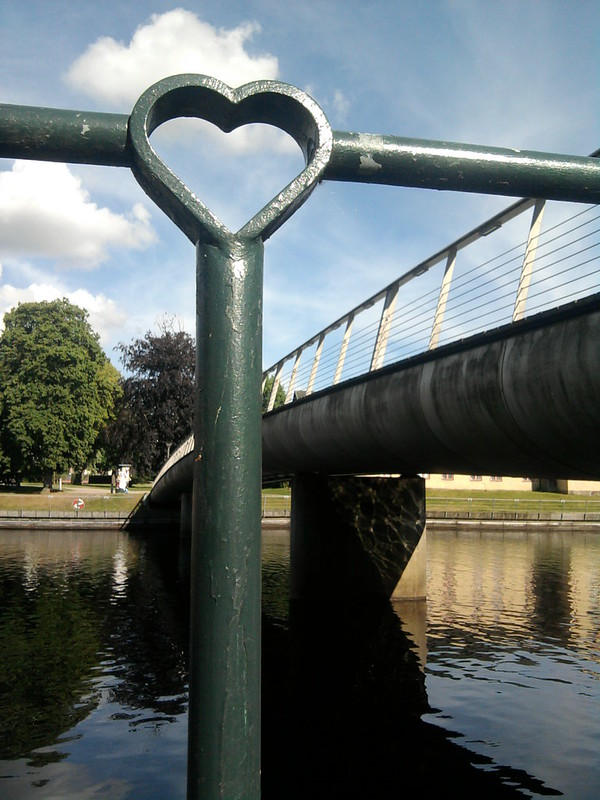 Pictures from the building and installation of the piece. Photos © by me (and others coming later).

When I prepared myself for my participation in Sound at Nissan, I closely inspected the bridges in the area around Halmstad and contemplated the possibilities. “Strindberg's Bridge”, (or Gamletullsbron) striked me as ideal for An Acoustic Study Of The Ocean, but I also noted that it has strings (or wires) as it were a giant musical instrument. I thought the passers-by should be given the opportunity to play the bridge as a musical instrument, using the wires, which all had different sounds and pithches, and the love-locks that lovers had put there. As a “thank you” to the fish and other underwater inhabitants that I expected to hear through the An Acoustic Study Of The Ocean installation on the other side of the bridge, I also wanted to give them the opportunity to share the sounds with the beings under the river surface. I glued a contact microphone on the bridge and insulated a small car speaker, amplified through a car radio and car battery, and sank it into the river. It operated without a problem for a total of six hours, and the humans were able to hear their sounds in the battery speaker on the other side, that otherwise played the sounds from the An Acoustic Study Of The Ocean wire in the water.

Play The Bridge For The Fish! was a sound installation that I made as part of Sound at Nissan, Halmstad 2016: Sound Art along the river. International artists and local inhabitants co-operated in a series of sound expeditions, installations and performances along Nissan - from the harbor, passing by Tullkammarkajen and all the way up to Slottsmöllan. Organizer: Harp Art Lab. Guide book in English. Other participants: Kajsa Magnarsson, Laurie Tompkins, Mikael Ericsson, Klara Andersson, Ann-Louise Liljedahl, Julie Ericsson, Conor McCafferty, Aga Jarząbowa and Maciej Bączyk; Roots with music by Pin Park.

I performed four pieces: Play The Bridge For The Fish!, Sound Fishing, An Acoustic Study Of The Ocean, and Stringed Stirrups in collaboration with Ann-Louise Liljedahl and Mikael Ericsson. I also had two guest appearances as a rabbit in performances by Kajsa Magnarsson.