The Kaleidochord, the complete (although never finished?) version, played and filmed by myself at the exhibition in Lisburn, Northern Ireland '03.

KaleidochordToccata by tintinnebula
While you read about it and browse the pictures, why don't you listen to this beautiful recording of a visitor to the Gloucester exhibition, composer/improvisor Julia Price!
“A freely improvised piece for Kaleidochord [...] With obbligato accompaniment by the wheezing and clunking of the Octo-Organ [Simon Desorgher] and the shimmering of sheet metal from Tsjuji [Max Eastley]. Please forgive the distorted passages - got a bit carried away and wasn't watching the recording levels!!! Performer - julia cl price. Release date: Jul 23, 2010 ” 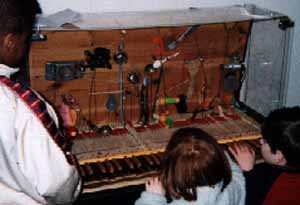 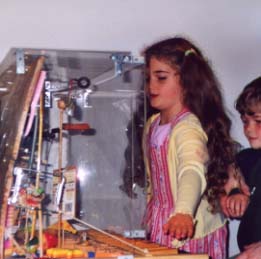 The Kaleidochord, played by children at its Liverpool exhibition, and in its Croydon exhibit. 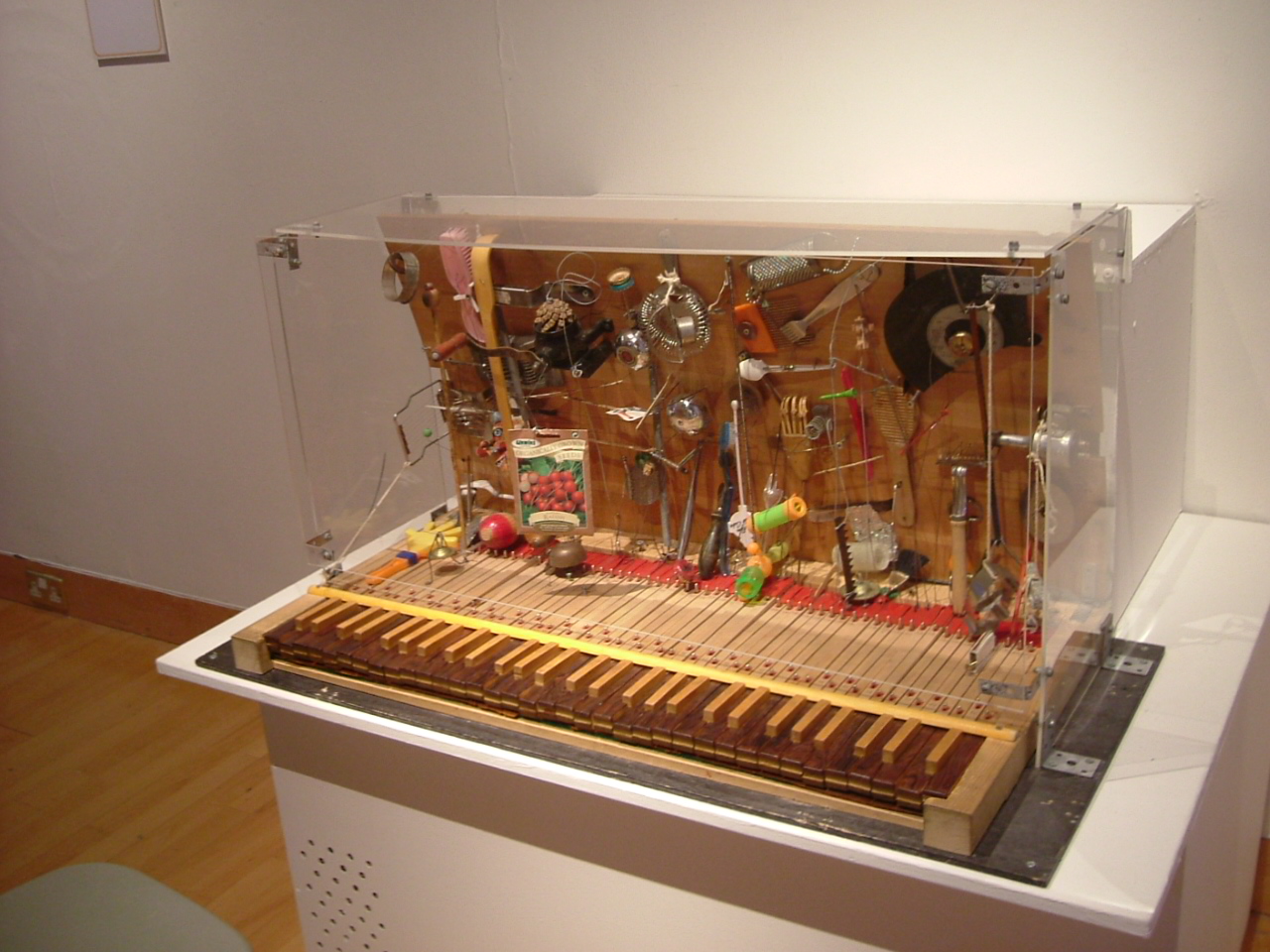 Arriving view of the Kaleidochord at "Fabulous Sound Machines" in Tulliehouse Museum and Art Gallery, Carlisle Jul-Sep '05, the finished version. 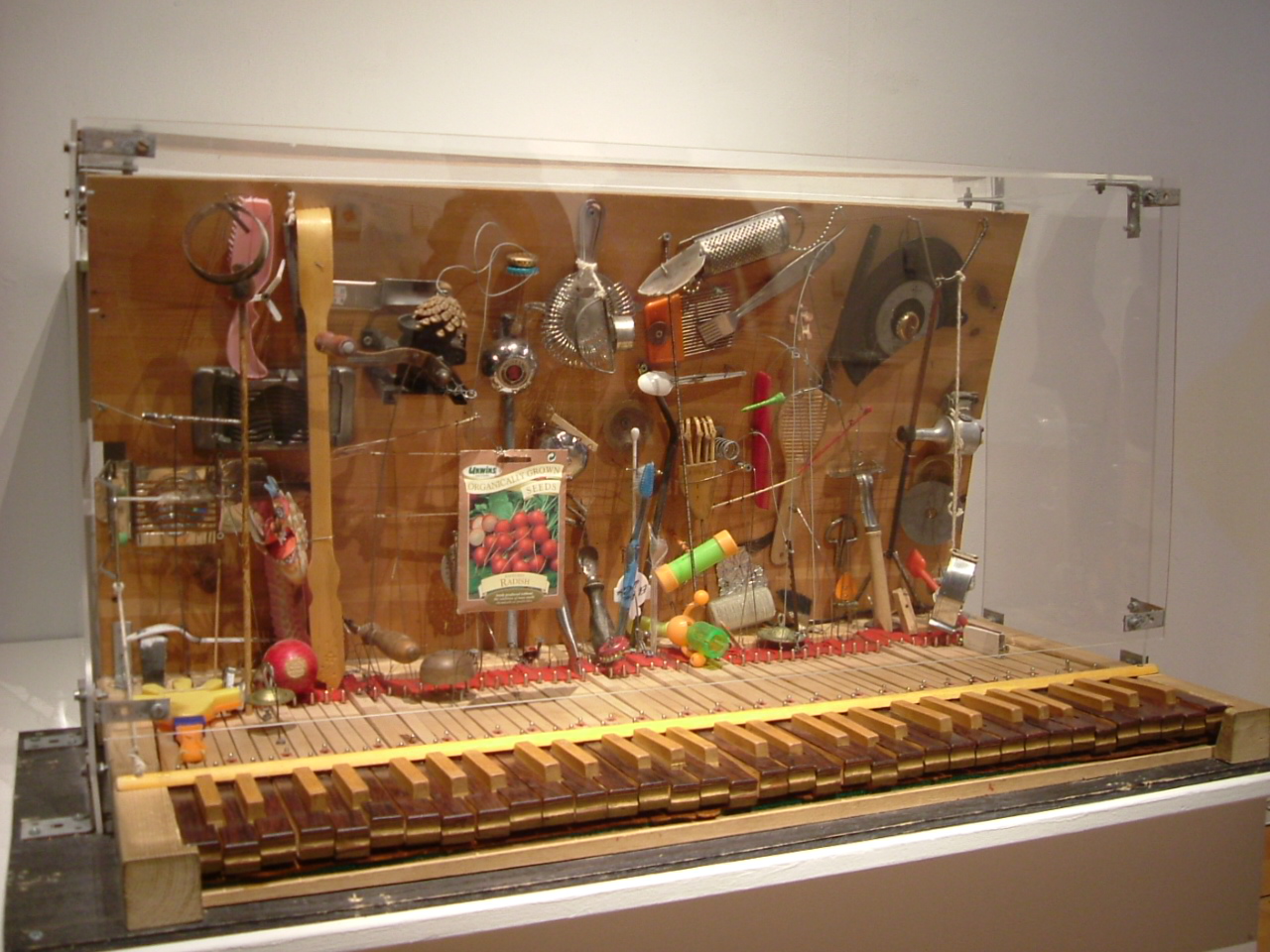 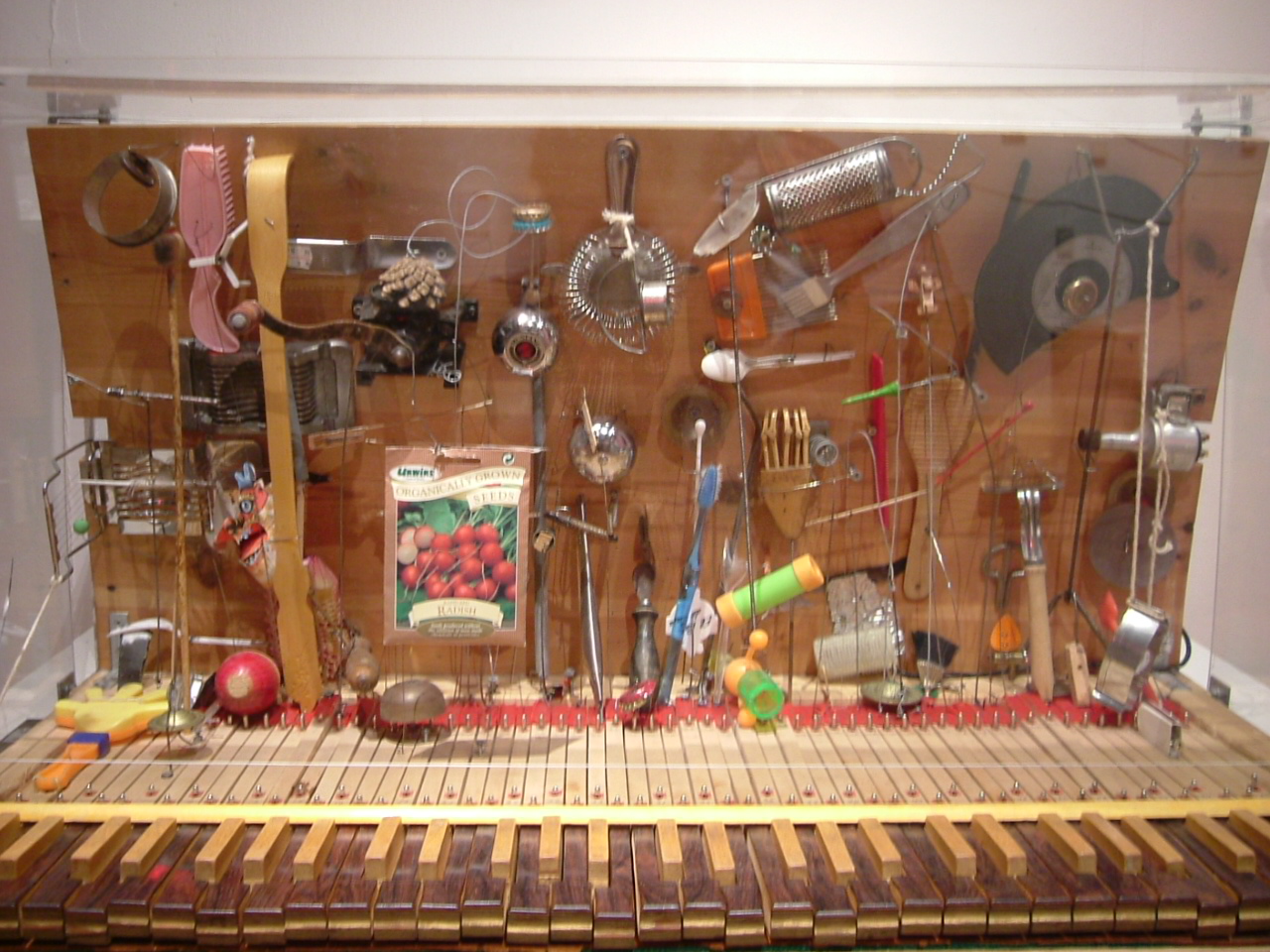 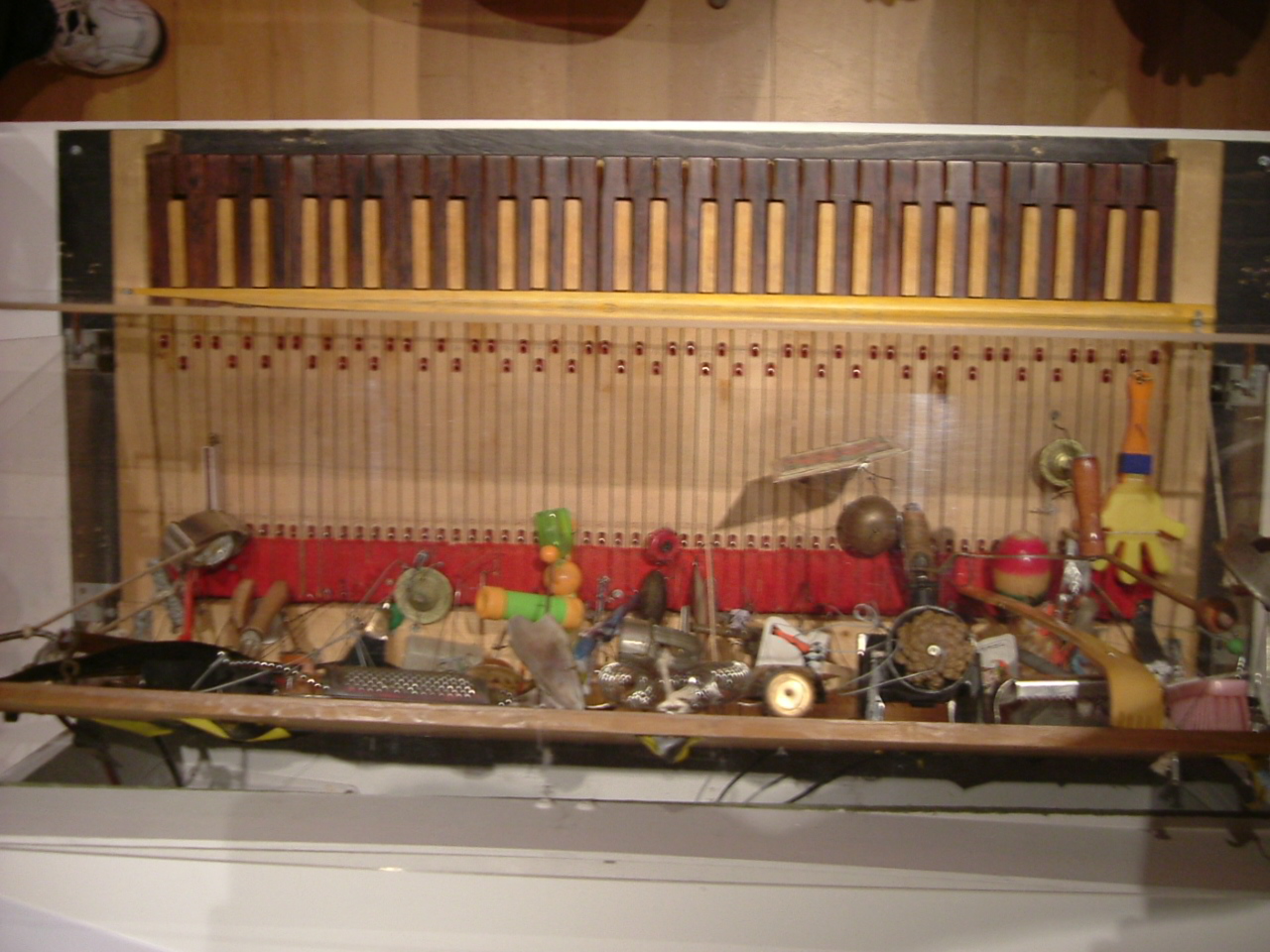 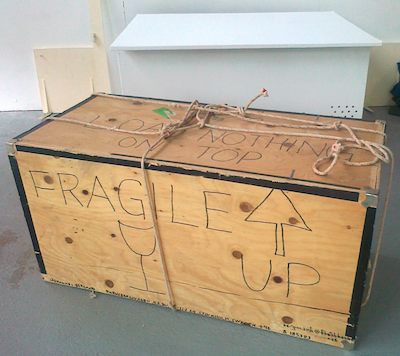 Arriving to the Old Market Gallery in Rotherham, Yorkshire in June 2012, it was a sweet sight to see the specially constructed, battered box containing the instrument waiting for me to treat it with some TLC for its new exhibition. 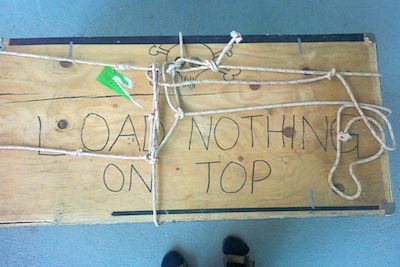 The warning sign intact. (The box is perhaps too fragile for its purpose and it's very narrow inside.) 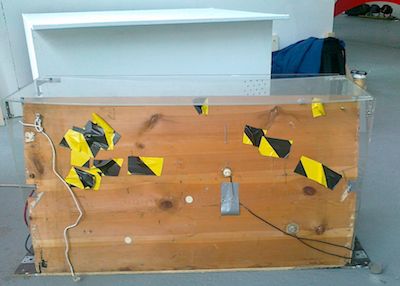 The back with a couple of contact mikes and protecting tape for some protruding sharp piano strings. 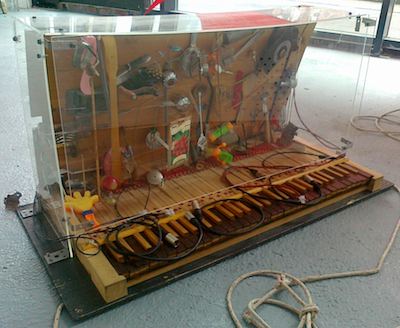 The front with the cables ready to be plugged into the mixer. 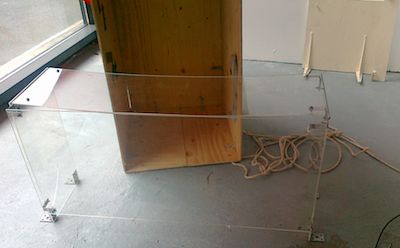 The protective glass removed, the transportation box behind, and to the right one of the walls to protect the back side. 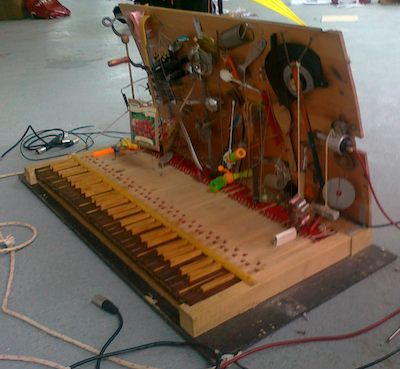 The Kaleidochord naked, ready for action. 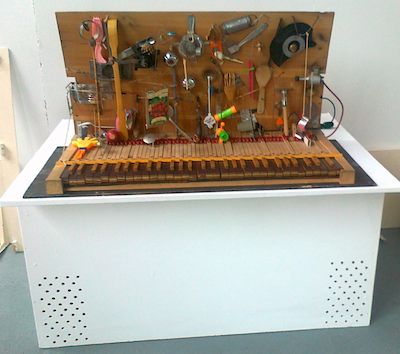 Mounted on its specially made plinth.

This metal percussion piece was repaired and improved.

This bell mechanism was improved which has always been a difficult problem. Now it's better than ever. It's only a quite slack fishing line which gets even more slack and it needs a good impulse for the weight to fall down from a proper height. Tricky ... 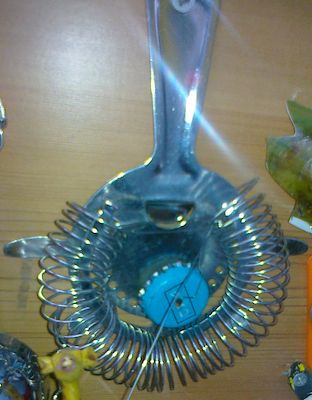 The ice strainer noise was a bit too unstable. I replaced the beater with bottle caps and made the mechanism more rigid. 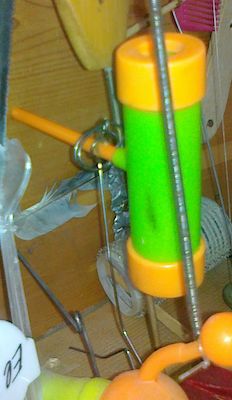 This toy hammer makes a silly noise when it's turned around. The former mechanism did that, but was too ineffective and the resulting sound was very faint. Now, it also makes a noise when you shake it up and down, and when I changed it in order to do that, it became much more effective. 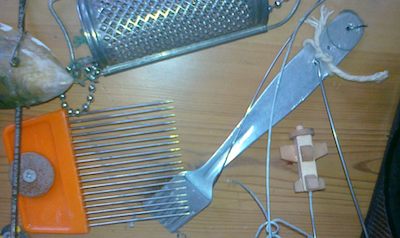 The unidentified metal tool that plays the onion holder was playing it on the outside but often got stuck and twisted. I changed it to play it from the inside, which seemed to do the trick very well. 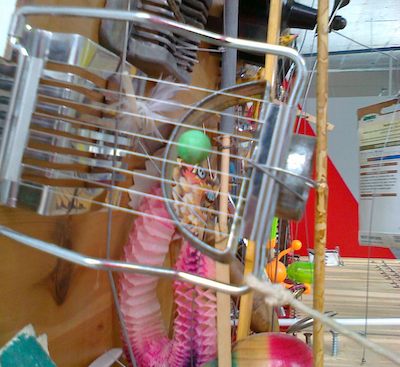 The egg slicer is beaten by the little green ball on a string, but it was bouncing around without much control. The cake shaper that used to make noise inside the ice strainer I moved here because it seemed to have the right form to keep the ball in control.

The plastic clapper used to make some noise by adjacent keys hitting it. I lifted it up with a screw in the middle of the key as well as on the side which fixed that problem. 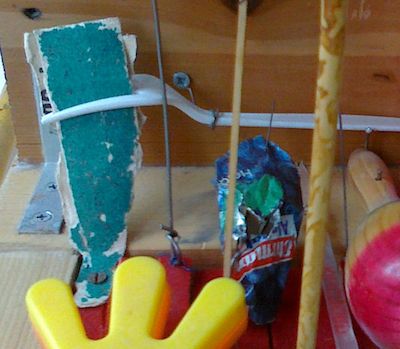 The sandpaper scraping on the plastic fork was worn so I replaced it with new and more coarse sandpaper.

The paper dragon had been nocked away and is now ready to dance again.

The new straw lever that made the fishing line move much more vividly for the bell beater to fall down quicker.

The strange scraper tool was scraping the sound board which wasn't making much noise. I put this slate that I brought in front of it instead, which was stronger and made a more interesting sound as well as sight. 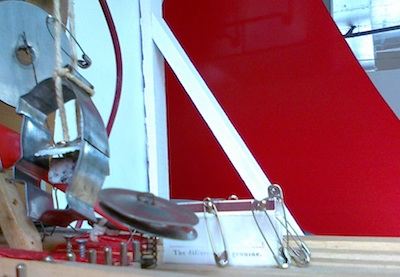 Three things in this picture that were regulated: a) The pig cake form with the flattened bottle cap inside it was bouncing around a bit too much and was a bit too random to hit. I put another screw on the key to increase the chances and also put some safety pins around the rope to keep it a bit more in place. b) The small cymbals were improved by being put on a spring. Looks more fun, too. c) The match box has been shaking a lot of things in it, including matches and cocktail pins. They have all flewn away all over the place. This time the theme is safety pins! 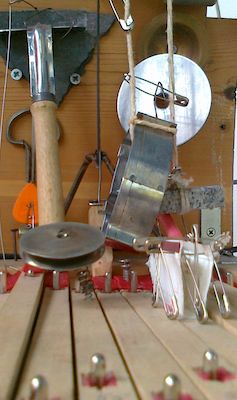 The pig, cymbals, match box, big metal ring (working like a crotale bell, it had also been knocked out and needed to be put in place in a more secure way) and stone seen from the front. (I also regulated the plectron on the jew's harp a bit.) 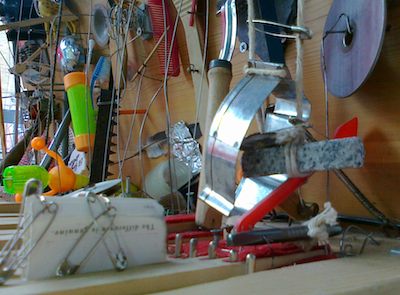 And as seen from the right with a nice view of the other constructions behind them. Here you also see the piano tuning pin that beats the stone, I regulated it a bit as well.

The big back scraper was scraping the sound board but did little more than just shake the whole construction without making much noise. I brought small bits and pieces of materials, toys and objects, many of which I usually use when I play the Platforms construction, as much as I could fit into my hand luggage on fucking Ryanair, the World’s most hated airline. One of my favorites was the toy gas station. It seemed to be the right idea for the back scraper, and after much trial and error, it seemed to work well.

Seen from the front, the scraper became a lever in the form of a long arm.

I also regulated this thing, that I believe to be a copying tool for sewing patterns onto the cloth to be cut. Here it's trying to cut itself through the sound board and making noise while it does. 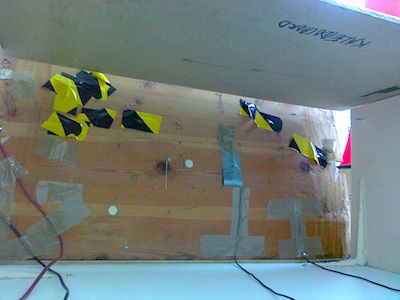 From the inside of the protection cupboard on top of the plinth, to the back of the Kaleidochord. I put some extra tape on the contact microphone (and bicycle light generator) chords. 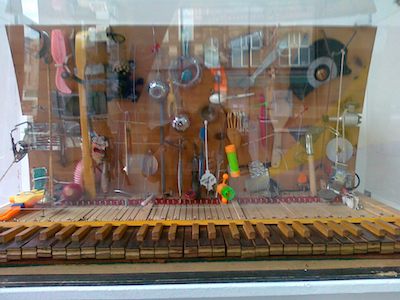 Kaleidochord from the front with newly polished glass. 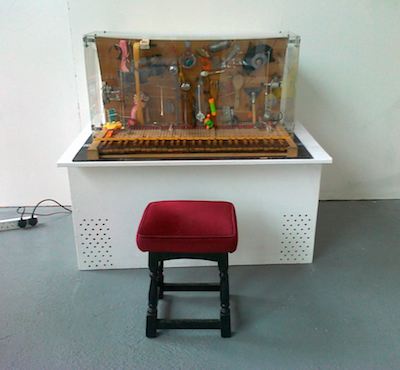 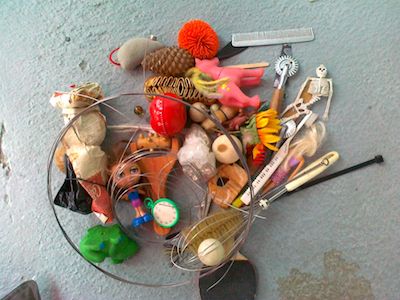 What remained from the toys and materials that I brought. Most of them go back to the Platforms suitcase to be played again.