Pressrelease on the web here: http://bergmark.org/pressrelease2.html
I'm exhibiting one interactive sound sculpture and the soundtrack to a film in two very different places and environments this summer of 2010. Check it out:

Imagine ... a world of colour and sound that you can control.

Throughout the summer, Gloucester City Museum becomes home to a unique exhibition that invites visitors to touch, explore and create their own orchestra of sounds.

Internationally respected artists and musicians from Sweden, Germany, France and the UK have created sculptures that also act as intriguing musical instruments. Fabulous Sound Machines includes strings that you pluck to create colour and music, a doorbell 'organ', a harpsichord containing an Aladdin's cave of objects rather than strings, a giant wind instrument with bellows and pipes, and much, much more.

All of the individual sound sculptures are framed in a world of colour created by artist Peter Jones and composers Lawrence Casserley and Simon Desorgher. Other contributors include Johannes Bergmark, Hugh Davies, Dan Knight and Will Menter.

‘This is a new record for attendances and shows how much people like making noises! The eight sound machines are a cross between works of art and musical instruments. Unlike most works of art, these are meant to be handled and unlike most art exhibitions this one is devised to be noisy...just how noisy is up to you. Suitable for all ages from a few years to one hundred!’ The Gloucester City Museum website.

More about my piece the Kaleidochord (film, sound, pictures, text). 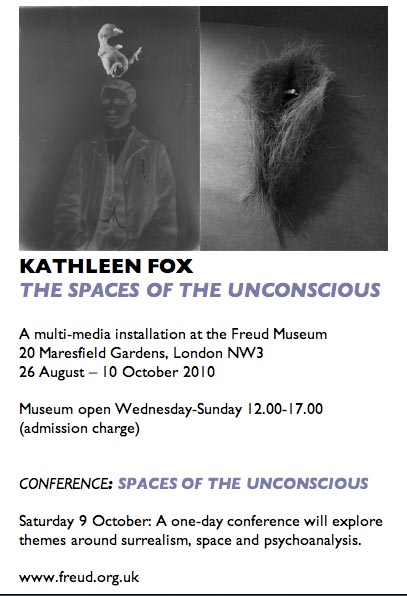 This multi-media installation by artist Kathleen Fox is part of the established series of contemporary art exhibitons at the Freud Museum London. Kathleen Fox situates her practice within the critical context of surrealism, a movement explicitly grounded in creative response to Freud's psychoanalytical discourse.

The installation questions the way in which the thresholds between the conscious and the unconscious are negotiated and how the viewer is impelled into spaces that are simultaneously real and imaginary. It invites re-assessment of how Freud's therory has been utilised and developed within surrealism, something which will be a central theme of the accompanying one day conference, to be held on Saturday 09 October.

Kathy Fox invited me to make music for a film she is displaying in the exhibition. I won't publish it until you've seen the exhibition, but meanwhile, look at another similar collaboration we did here.

Contact and upcoming events.
The Welcome page.
Updated the 7th of September, 2010.